Rules For Charades: How to play and more!

Let’s talk about the rules for charades…Charades is a word, or phrase, guessing game. It is an acting game in which one player acts out a word or phrase while the other players guess the word or phrase. The idea is to use physical language to communicate the meaning to another party. While Charades is often played at parties, it is traditionally played at Christmas and on New Year’s Eve.

The technical rules for charades are usually informal and vary widely, but most are in agreement on the basic rules on how to play charades:

Each team will have access to slips of paper, the ‘Charades Words’, or ‘Charades Ideas’.

These are a “secret” word or phrase, to be guessed by their other team members.

The most popular charades phrases are subjects everyone can relate to such as movies, TV Shows or Songs. (More about Charades Ideas).

The slip of paper with the secret phrase is revealed to one member of the team, the “actor”, but kept secret from the rest of his or her team, the “guessers”.

The actor then has a limited period of time, usually a minute, in which to convey the secret phrase to the guessers by acting or pantomime. Some play in a speed style where they guess as many as they can within that minute.

The actor may not make any sounds or lip movements. In some circles, even clapping or pointing is prohibited, while in others, the player may make any sound other than speaking and point to objects in the room. (More about Charades Rules Here). The actor is allowed to make any gestures other than actually spelling out the word. 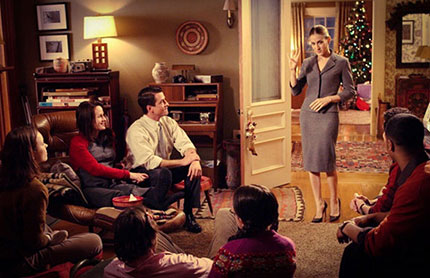 Playing Charades in the movie ‘The Family Stone’.

The guessers attempt to guess the word or phrase based on the actor’s performance. Remember, guessing is as important as acting!

As they shout out their guesses, they can ask questions, to which the actor can give non-verbal responses, such as nodding, or pointing at the player who is on the right track. When someone yells out an EXACT part, or portion, of the phrase, the ‘on the nose’ gesture is used.

When one of the guessers says the entire correct phrase within the time limit exactly as written on the slip of paper, their team wins that round and gets the point. (You’ll need a designated scorekeeper and a timer). The teams then alternate until each team member has had a chance to be the actor.

More on Rules For Charades:

Here are a few common clues used in charades:

Learn all the Charades Gestures | Need more info on how to play charades? Learn more about Playing Charades

Pictionary: A guessing word game invented by Robert Angel with graphic design by Gary Everson and first published in 1985 by Angel Games Inc.The game is played with teams with players trying to identify specific words from their teammates’ drawings.

All Our Charades News!

Get Social with Charades Clues

Stay current with the
Charades Clues Newsletter
We'll let you know when we have new Charades Ideas & Clues the moment they are released.
Tweets by CharadesClues

Here are 30 Free Charades Ideas to get you started. These 30 clues are from all our best categories: Movies, TV, Music & Pop Culture. As always, these clues are tried and tested for Charades.

All Our Charades Words & Ideas

Here are all our Charades Words & Ideas. Choose from all our best categories: Movies, TV, Music & Pop Culture. As always, these clues are tried and tested for Charades.

"I just wanted to tell you that you guys are the BEST Charades game site on the internet!"

"So many great charades ideas to choose from - totally fun. Charades Clues is the best. Thanks!"